Between being too daunted to try it - despite being an enthusiastic drawing doodler, and having a cripplingly fierce inner editor/ inner critic, I never really explored the painting side of art.

Until LittleOne came along - at which point, paint supplies, painting and arty-ing became staples of our playing and learning time. Then I figured I really should take advantage and learn to paint and play.

I tried to play with this piece, and ended up jumping between physical and digital media to reach a final painting pic which I think is pretty cool.

I started off here: 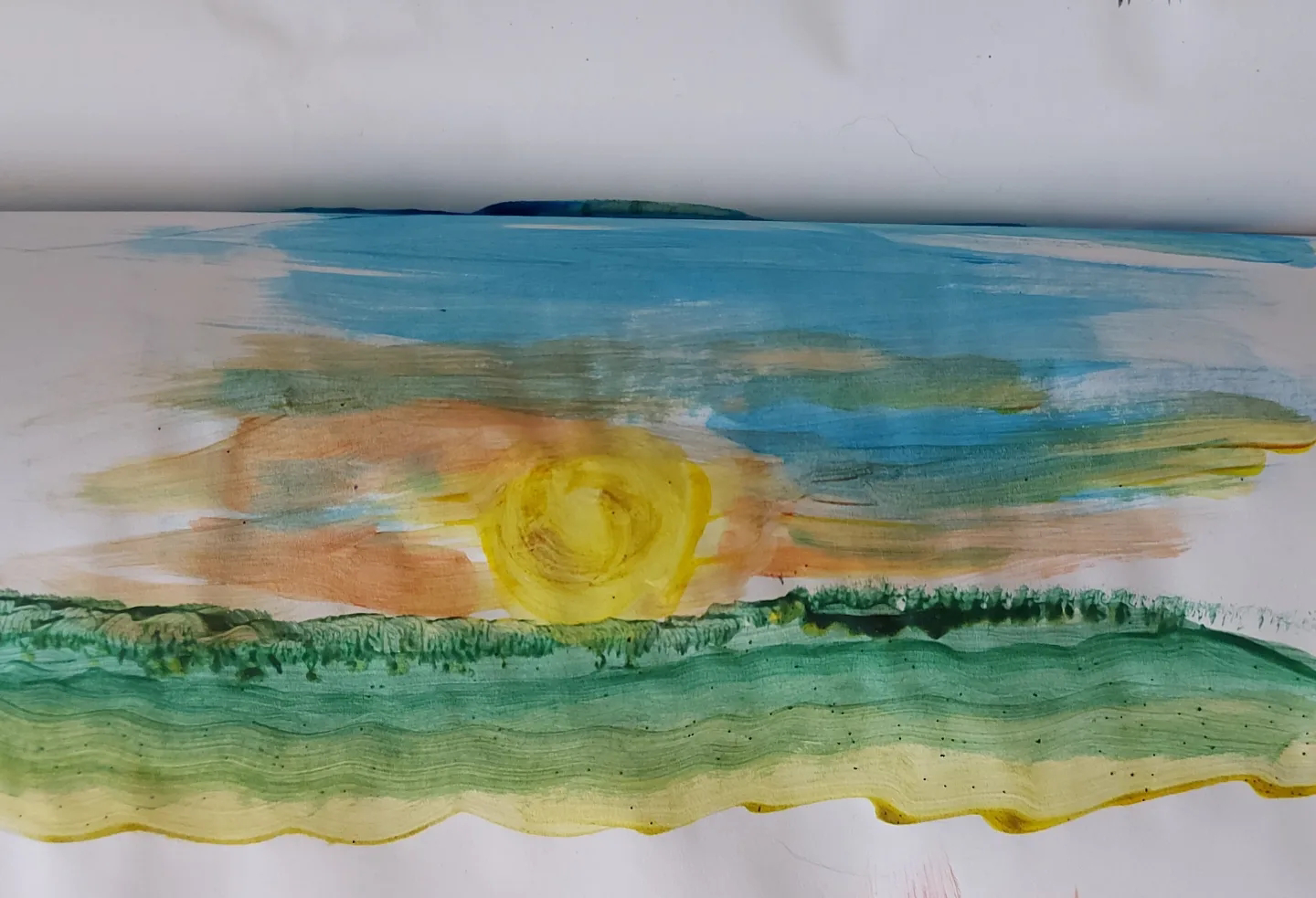 I started off here because LittleOne wanted to be the one to pour out the paints. Which meant we had quite a bit of leftover paint. Which also meant it was my job to use up the rest of the paint when paint-play was deemed over.

I quite liked the effect of the original painted image.

It initially didn't have a sky. But I liked it enough I thought it deserved one. Now I actually didn't have any leftover blue paint, so I ummm, stole some blue from one of LittleOne's generously-splotched paintings (I told myself I was helping it dry faster).

As a side note, I've discovered that I quite like the square brushes. I find the paint effects much more fun to play with.

Once the sky was in, I still liked it.

So I took the photo of the painting and opened it up in Photoshop Express app (free in the app store). I had fun playing with the colours and effects. 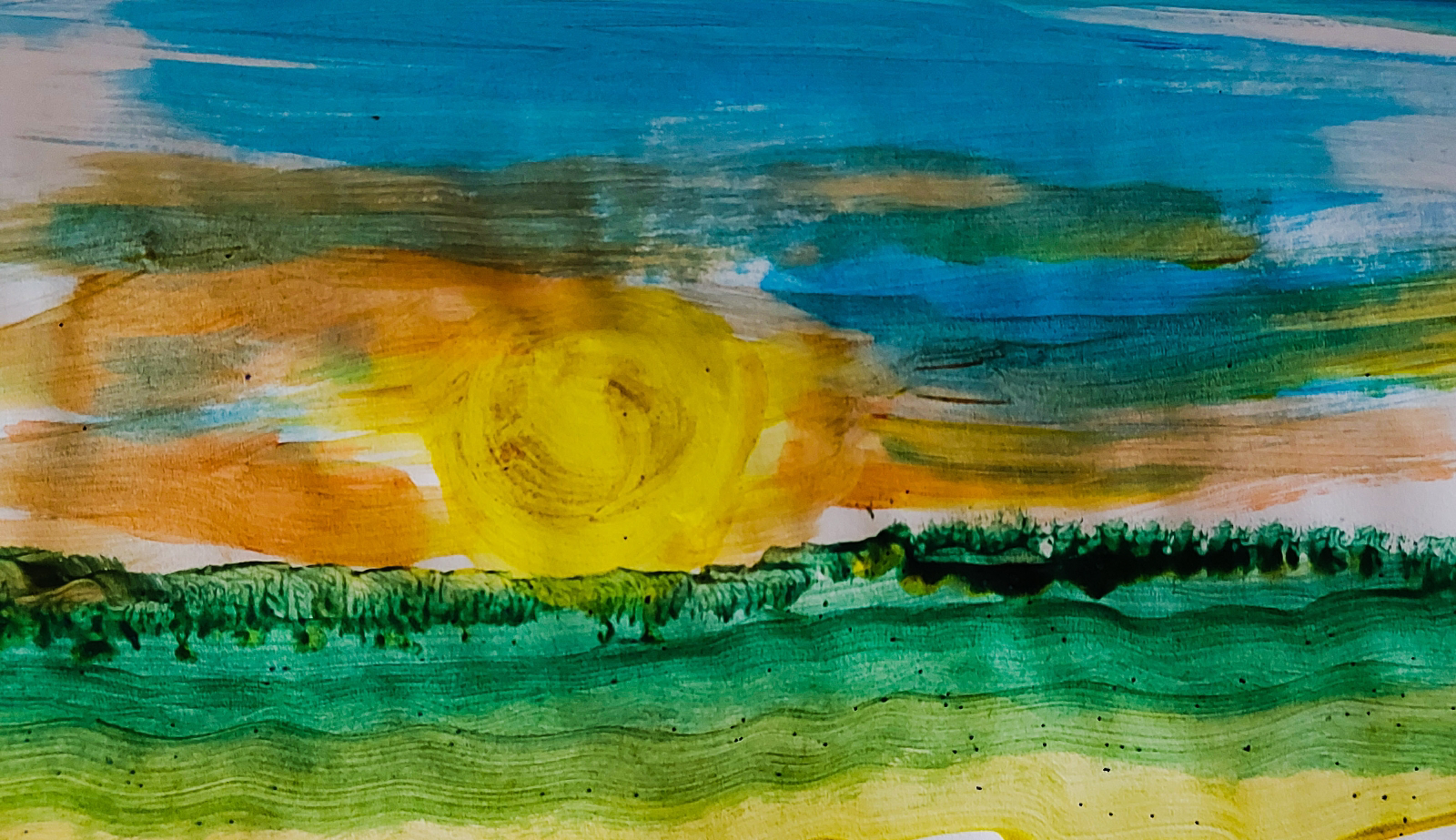 I still liked it.

Then I realised there was no light and shade in the image. This is the point at which not having any kind of painting skills becomes very obvious 😁

I briefly lamented the lack of an app to add light and shade to a photo, and then remembered *cue flourishing trumpets* my Autodesk Sketchbook app (also free from the app store).

It allows me to import photos into the app and draw on them. I've not done too much of this, but decided to try it. All on the phone version.

I realised the app has a colour-chooser 'pipette'-type tool which helped me zero in fairly accurately on matching shades of colour. Very cool.

Then I found the approximately-correct-sized digital brushes and sizes and used my inexpert fingers to experimentally paint on the screen. I made the sun rounder, added in some light on the field in front of the sun, and added in some colour at the edges of the image. 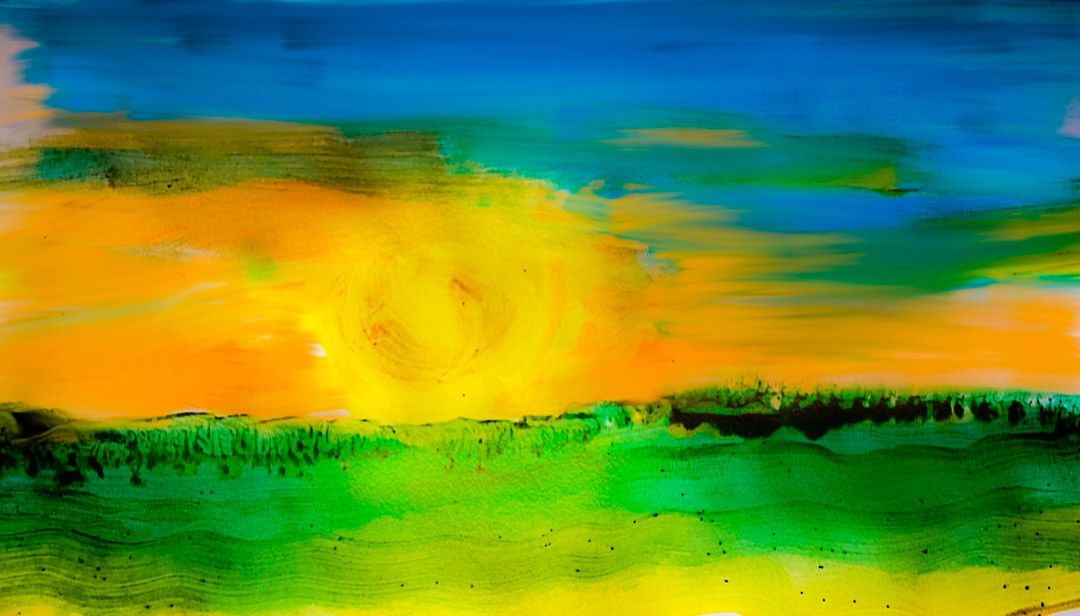 Then, a final unnecessary glossing and filtering back in the Photoshop Express app, and voila. 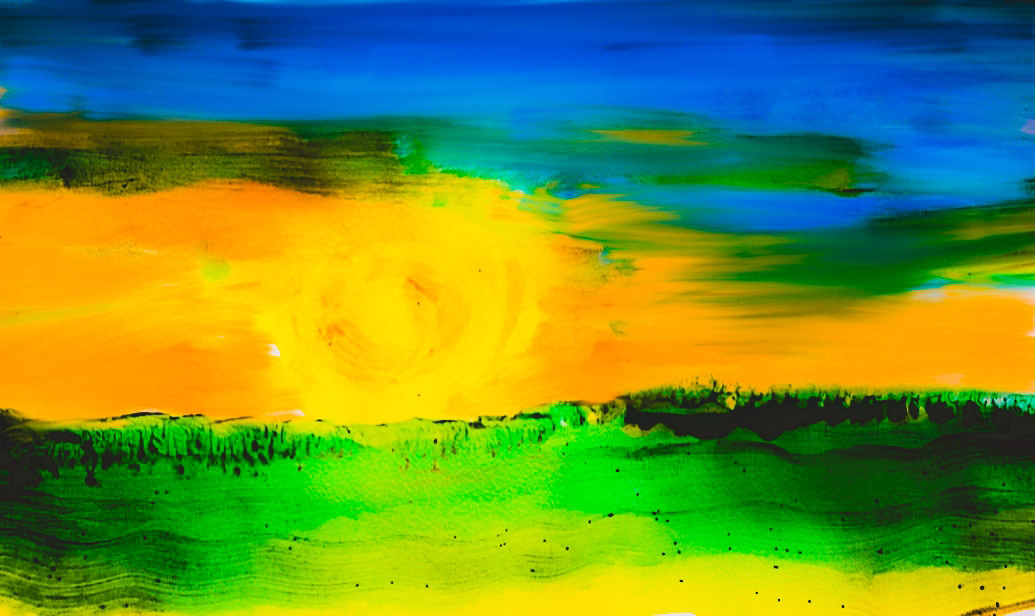 I'm still undecided about whether the second last or last image looks best (what do you think?)

Regardless, a definite contrast between the beginning image and the end one.

And definitely a fun exercise for taking painting baby steps. Score a win for creativity. I think I'll be trying this again soon!

Creativity on the Quick

By ReeD with a Bee February 20, 2022
I like to think of myself as creative.  I enjoy doing things like putting words together into stories, doodling drawings, and doing photography and photoshopping pics. Creativity is important. Creativity is important to me. I occasionally like to get on my high horse and gently scold people who declare themselves to be "not creative", pointing out that creativity takes many different forms, and that things we don't automatically think of as creative - like cooking - are actually replete with creativity. And that we should just try new, fun, creative things without expectation or judgement. Oh, hey, yeah! The person replies in an astonished voice because this is a take they clearly have not thought about before. They nod. Any unexpected hope quickly coloured by doubt. Then they go on their way - not really able to truly accept this perspective, relieved to be able to let it go and to revert back to 'common sense' - unchanged in their opinions.  And I will shrug a s
Post a Comment
Read more

Birds of Many Feathers

By ReeD with a Bee September 30, 2021
This was originally going to be a blogpost about the arrival of spring. Then I realised I had quite a few bird adventures and stories and photos from the past couple of months to share, so I figured I would make it a bird-brained post.  Then, I was originally going to include all my plover stories in the post, but it became really, really long. So the Plover Adventures got their own separate post.  And now, working backwards, here are some of the birds we've had the joy of seeing during winter and spring 2022 in our back garden,  here in Brisbane. The Heron One glorious winter's day in late July, our backyard was visited by this lil guy. I found out later it was a white-faced heron, the most common heron in Australia apparently - though I'd never even seen one before.  We watched for ages as it grooved all over the garden, paddling the overlong grass and weeds with its feet to disturb bugs and scoop them up to eat. LittleOne and I manage
Post a Comment
Read more