I deleted 300+ titles out of my Kindle 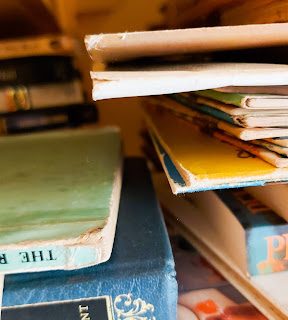 I purged some 300+ titles out of my kindle recently.

And I don't mean just deleting them out my kindle app library.

I mean, I actually went into my amazon account and went to the 'manage my content and devices' link and jettisoned them permanently.

When you do the permanent delete, you get asked 'are you sure?' for every single title. So that's 300+ 'yes, I'm sures'.

I'm not sure if this would be considered a drastic move or standard housekeeping.

Regardless, it was a well overdue step for me. You see, back when I set up and downloaded my first kindle app (circa 2012-ish), I was thrilled by the number of free ebooks available. I downloaded tons of stuff with carefree abandon. All of it. Fantasy-chosen-ones, bodice-rippers, classics, thrillers, chick-lits, dystopian sci-fi, kids books, recipe books... and everything in between.

It was probably the least picky (discerning?) I've ever been with my reading choices. I mean, they were all free, I love reading and space wasn't an issue! How could I go wrong?!

I found some unexpected treasures and savoured them. I can still remember where I was when I read some of them. Others I jumped into cheerfully, only to lift my head a disconcerted 5 minutes later going 'really?'

I realised that I didn't really enjoy reading on a screen. So, where I might normally finish a physical book even if I was struggling to connect to the story, the ebook/screen format meant that I gave up on it.

My kindle had became choked with unfinished books. If it had been a physical library, it would have been a dense mausoleum, full of stale air, and books splayed and sprayed everywhere in dusty, dissatisfying, overwhelming chaos.

One of the things I wanted to do for myself this year is read more. A graveyard of ebooks isn't a good place for me to enjoy reading.

Of the 300+ now-deleted titles, it's interesting to see how many I downloaded in 2012 or 2013, and in that whole time since, I either never opened, or didn't want to finish.

I've now got a minuscule 99 titles on my kindle.

They're a mix of fiction/novels in genres I'm actually interested in, self-published books - many of which are written by the online Twitter writing community I'm patched in to (ie., my Twitter friends), and writing craft books.

My kindle library is now more curated to my interests. Which is how it should be.

I've kept a few wild cards left over from the free-for-all downloads a decade ago. Just a wee smattering of random to keep me on my toes.

It's now much more of a space I can look forward to heading into. Where I can again feel the frisson of excitement and anticipation of an unread book. Where I can tolerate the ebook format to reach all the way to end of the story.

I'm now heading to the kindle app before my social media apps these days. Which is saying something!

I've even read two novels recently, both on my phone kindle app. Something I've never managed before.

They were both amazingly imagined stories. Inspiring and intimidating. To the point that I'm now half-feeling that my imagination is falling well short of the standards needed in my creative writing! 😂

Creativity on the Quick

By ReeD with a Bee February 20, 2022
I like to think of myself as creative.  I enjoy doing things like putting words together into stories, doodling drawings, and doing photography and photoshopping pics. Creativity is important. Creativity is important to me. I occasionally like to get on my high horse and gently scold people who declare themselves to be "not creative", pointing out that creativity takes many different forms, and that things we don't automatically think of as creative - like cooking - are actually replete with creativity. And that we should just try new, fun, creative things without expectation or judgement. Oh, hey, yeah! The person replies in an astonished voice because this is a take they clearly have not thought about before. They nod. Any unexpected hope quickly coloured by doubt. Then they go on their way - not really able to truly accept this perspective, relieved to be able to let it go and to revert back to 'common sense' - unchanged in their opinions.  And I will shrug a s
Post a Comment
Read more

Birds of Many Feathers

By ReeD with a Bee September 30, 2021
This was originally going to be a blogpost about the arrival of spring. Then I realised I had quite a few bird adventures and stories and photos from the past couple of months to share, so I figured I would make it a bird-brained post.  Then, I was originally going to include all my plover stories in the post, but it became really, really long. So the Plover Adventures got their own separate post.  And now, working backwards, here are some of the birds we've had the joy of seeing during winter and spring 2022 in our back garden,  here in Brisbane. The Heron One glorious winter's day in late July, our backyard was visited by this lil guy. I found out later it was a white-faced heron, the most common heron in Australia apparently - though I'd never even seen one before.  We watched for ages as it grooved all over the garden, paddling the overlong grass and weeds with its feet to disturb bugs and scoop them up to eat. LittleOne and I manage
Post a Comment
Read more